DIY Heating Plumbing Tips 6 - Explains where a circulator should be installed in an open-vented heating systems and why.

Below is a list of what's on this page:

When installing a hydronic central heating circulator (wrongly called a 'pump') in a new heating system or replacing one in an older system (excluding a system boiler, or a combination boiler that incorporates a 'built-in' circulator) you'll need to have an understanding about 'system pressure' in open vented systems.

The 'neutral point' is where the cold feed from the F & E cistern/tank connects to the heating circuit (at this point the system is open to the atmospheric pressure and the static head pressure). The neutral point is so called because even when the circulator is running and there is a pressure change within the pipework, the static pressure remains the same at the neutral point.

Note: in systems where the 'open-safety vent-pipe' and the 'cold feed pipe' are connected to the boiler, then the boiler becomes the neutral point in the circuit.

When the circulator is fitted downstream of the open safety vent pipe and the cold feed pipe on the 'primary flow pipe' there will be positive pressure in the heating circuit greater than the static pressure at the neutral point.

When the circulator is connected to the return pipe water is affectively pulled around the heating circuit. This negative pressure can cause air to be sucked into the system through glands, valves and even minute cracks. Rust will occur when there is excessive amounts of oxygen within the system especially in mild steel radiators.

Note: Best practice is to position the circulator on the 'primary flow pipe' after the neutral point as this ensures that the system is always under 'positive' pressure.

With the close-coupled configuration of the open safety vent (OSV) pipe and the cold feed pipe which are now quite common, the same principle of positive pressure still applies.

However, to prevent the direction of flow acting upon the the vent pipe, i.e, water flowing up and out of the vent pipe, an extra bend can be added to to divert the flow across the vent pipe as opposed to up into it.

It is also good to increase the diameter of the horizontal connecting pipe between the OSV pipe and the cold feed pipe as this will reduce the velocity of the water flow therefore allowing air bubbles more time to escape up the OSV pipe. 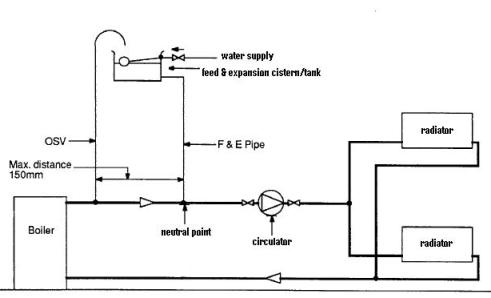 The picture above shows a close coupled configuration of the OSV pipe and the F & E pipe, maximum distance apart 150mm

In some old systems where the circulator is positioned in the return pipe but after the cold feed pipe. The only resistance to the water flow in this setup is the boiler's heat exchanger. This means that if the open safety vent pipe is not high above the feed & expansion cistern/tank 'pumping over' will occur as modern circulators can produce up to 3 times more pressure than older models.

This pumping over of water from the vent pipe back into the feed & expansion cistern/tank will cause excessive oxygenation leading to severe rusting and corrosion of any ferrous components within your heating system.

For domestic installations it is recommended that the circulator be installed on the 'primary flow pipe' after the OSV pipe and the cold feed pipe to provide maximum inlet pressure for the circulator, and to ensure that the circuit is under positive pressure with adequate resistance.

Note: If your old circulator was on the return pipe before the cold feed, which was the common practice years ago, then be aware that the new circulators are more powerful and may cause a massive increase in negative pressure and will without doubt cause air to be drawn into the system causing poor performance and circulator failure.

If the circulator is positioned before the OSV pipe then the water will again pump' over' rather than go around the heating circuit.

When you are replacing a circulator in an old system (or replacing an old boiler with a new one) you should have the system power-flushed to remove any debris and foreign matter from the system which may have caused the failure of the original circulator.

Power flushing should be done to prevent the recurrence of the problem.

Debris can accumulate on and around the circulator's impeller causing loss of performance through blockages. this debris is typically made up of copper fillings, bits of solder, wire wool, polytetrafluoroethylene (PTFE) tape and even flakes of metal and paint.

Power flushing will remove greasy sediments which can accelerate the build-up of magnetite sludge, treating the system with an appropriate chemical inhibitor will prevent the build-up of 'black ferrous oxide' magnetite sludge. Magnetite will naturally build-up within an hydronic heating system over time due to metallic corrosion if not chemically treated 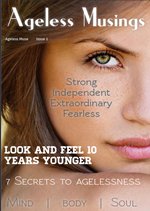 Information given on this site is for general guidance only. Contact your local specialist for further information. Copyright © 2021 Home-Heating-Systems-and-Solutions.com All Rights Reserved